9 projects, representing more than 1.000 fast charging stations and 36 project partners presented their project results & challenges in a joint stand at the TEN T days in Rotterdam. The CEGC project was part of this joint presentation, highlighting the cross-border approach and successful implementation of 115 charging stations in the project area, but also the technical and organisational challenges ahead. As part of the exhibition, the OEM partners provided rnd 30 electric vehicles for test drives for the conference participants. 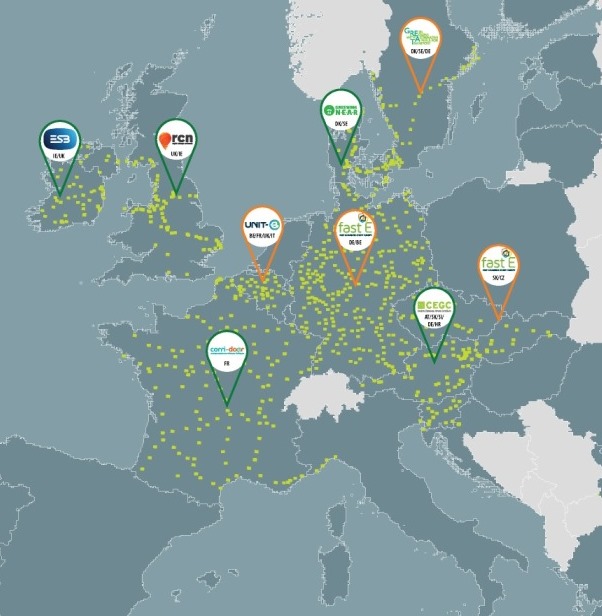 Pictures from the event:

CEGC representatives were invited to present their project results and learnings at the FAST E (DE/BE) opening event on 20th May 2016 in Berlin.

This was the Joint TEN T Closing Event in Brussels

The electrification of transport is vital in reducing both oil dependence and CO2 emissions, while improving air quality in cities. The direct synchronicity between electric mobility uptake and infrastructure development is being reported from the findings of four current TEN-T supported Electric Vehicle infrastructure projects, which have joined together to mark the successful outcomes of their projects.

The development of fast charging networks for electric vehicles are essential in promoting electric mobility for customers and the projects are showcasing their innovative solutions to cross border implementation of new technologies and services. The four projects CEGC, CorriDoor, GreeningNEAR and RCN are supported by a large range of partners including major OEM partners, BMW, Nissan, Renault and VW; national Governments, e-mobility operators, utility companies and academic organisations.

On 1st December 2015, the Joint closing event was organised in Brussels.

The joint press release of the TEN T closing event is available for download here.

The project CEGC Central European Green Corridors is driven by the emerging need for decarbonisation and electrification of EU road transportation and by the related interoperability and synergy opportunities. The project aims at deploying infrastructure in Central Europe making driving of all vehicles with an electric power train a viable alternative to vehicles with internal combustion engines. CEGC will focus on the roll out of the technologies ready for mass market deployment in the short term (high power charging for electric vehicles) and additionally carry out studies examining the preparation required for the roll-out that will be ready in the mid-term (future customers, clean energy for transport, network planning) thereby opening the market for an even larger customer base in the future.

Outline of the Project

The network will be fully interoperable and will support roaming of customers between the regions covered in the Action. Pre-agreement of specification to ensure interoperability has been concluded. As part of the project, the partners will set up and operate suitable back-end ICT systems to provide interoperability. Furthermore, the partners will provide ad-hoc access to charging services for customers without pre-existing service contracts.

CEGC (2013-EU-92069-S Central European Green Corridors - Fast Charging Cross Border Infrastructure for Electric Vehicles, Connecting Austria, Slovakia, Slovenia, Germany and Croatia)  was submitted under the TEN-T call for proposals 2013 and will be implemented with support from the EU financial aid in the field of the Trans-European Transport Network.